If you happen to see some kind of odd bow-tie shaped screw slots on your door or window pane, you’ve probably discovered the clutch head screws.  Such fasteners were extensively used in the auto industry from the 1940s through the 1960s. In 1970s, few of these screws also paved their way into travel trailer manufacturing industries as well.

Clutch head screws are also known as ‘One Way Screws‘ and ‘Security Screws‘. These specially designed fasteners are used for lasting installations. These are easy to use and can be installed using a normal screwdriver. The head of such kind of fastener features a normal drive and slanted rear face, which prevents the screwdriver from applying torque when trying to loosen these fasteners.

Once implanted, these rivets require typical drilling application for removal from the holes. However, you can even fetch for a special kind of driver bit to undo them. 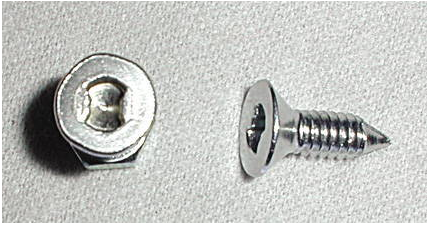 In order to unscrew these rivers, you’re required to use a screwdriver bit of the same shape and size. The clutch head one way screws can be unscrewed in the clockwise direction by using a standard slotted screwdriver. This drive system was probably the worlds first security recess.

This unique feature enables such screws to be tamper-proof, thereby enhancing the security of your house and lessening the risk of robbery and making it impossible for the intruders to tamper the screws. Due to their unique design, there are even ideal for higher torque applications.

Thus, these fasteners are also referred as Jail Head. They are usually self-tappers and are used in applications jail cell hinges and even in domestic window locks and exposed door lock screws. The clutch head screws are usually of two types: type A and type G. The type A is also known as a standard clutch and usually resembles a bow tie. And the type G resembles a butterfly.

These are zinc plated hardened steel and cannot be removed once they are installed. Besides, the countersunk clutch head screws can only be opened by a flat head screw driver

The type A screws were widely used earlier and were commonly seen in 1940s’GM automobiles, including trucks and buses. And the type G rivets are commonly used in the construction of mobile homes and recreational vehicles. You can even find them in your windows and doors, if they’re installed with some odd bow-tie shaped screw slots. These are ideal for

A police survey shows that around 30% of the intruders gain access to the houses through windows. Therefore, it’s utmost necessary to keep your windows secured. Beat the thieves with the clutch head screws!

Their ‘one way’ design lets you fasten these screws with an ordinary Slotted screwdriver, but unscrewing them is virtually impossible. Hence, these can be of great help, as their unique features make it impossible for them to be unscrewed using a driver, instead a driller is required to undo them.

There’s another kind of screw known as A2 clutch head round wood screws. 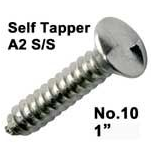 These fasteners are also known as Clutchless Screws and are made up of A2 stainless Steel.