Framing a drywall patch area may require a screw primer. Strength has to do very little in such a case, as no serious loads will be put on the framing screws. So, any fastener that goes through the 2 x 4 dimension of the existing framing can work. Since a 2×4 stock is only 1.5 inches thick, so you’ll need a screw of at least 1/2 inch longer than the stock. A really long screw can be a disadvantage, as it will take longer to drive, thereby incurring more friction. A thick screw is however recommended for framing in a drywall patch area. A 2 or 2.5-inch screw is a suitable option, as the user will be drilling at a particular angle through the wood.

Framing screws, which are used for installing a gypsum board usually feature flat/concave heads and are thin at the rim. Fasteners with heads, having a diameter ranging between 1/4 inch and 5/16 inch should be used, so as to provide sufficient holding capacity without have to drilling the face paper when the screw is indented. Use of casing nails should be avoided, as their heads are too small as compared to their shanks; consequently these nails can easily cut into the face paper. Large-size screw heads can easily cut the paper surface if the rivet is drilled incorrectly at a slight angle. So, screws long enough to go through the wallboard layers should be used. Plus, in supporting construction, they also render adequate holding capacity. Always make sure that the diameter for screw penetration into framing members should be 7/8 -inch for smooth shank nails and only ¾ -inch for annular ringed nails. This kind of specification provides more withdrawal resistance. 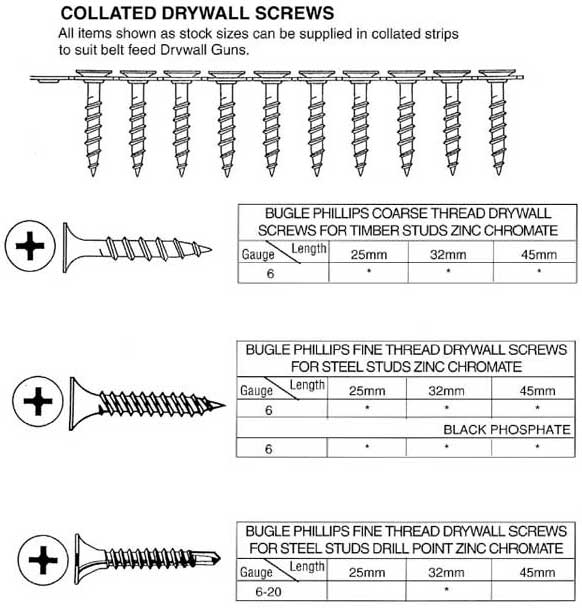 These types of rivets secure the board firmly to the supports without affecting the board. They reduce surface defects occurred due to loosen boards and shrunk lumber. The specially contoured heads of such framing screws, when correctly driven, create depression-free uniform ragged edges. Proper installation of the rivet on the power screwdriver enables accurate countersinking of the drywall screw head with joint compound for a proper fastener concealment. The above images used for the three basic types of drywall screws; Type S for light gauge steel studs, Type W for wood and Type G for solid gypsum construction. The image also features a sample of a Type S-12 screw, which is used for fastening wallboard to heavier gauge steel framing.

Type S gypsum drywall screws are used for attaching gypsum board to furring/steel studs. These rivets are usually self-drilling by nature, featuring a self-tapping thread and a hardened drill point for inserting the metal with little pressure. This kind of fastener caters to easy installation, which is necessary, as steel studs often are flexible and tend to bend away from the screws.

Type W gypsum drywall screws are used for attaching gypsum board to wood framing. The diamond-shaped points of these rivets enable effective drilling action through both gypsum as well as wood, and their specially designed thread renders fast penetration, thereby enhancing the holding capacity. Such  screws are installed into the supporting construction, which is at least 5/8 -inch thick.

Type G gypsum drywall screws are used for attaching gypsum board to gypsum backing boards and are quite similar to type W screws. However, they feature a deeper special thread design and are usually 1-½ inch in length. These drywall screws are installed into the supporting board at a diameter of at least ½ -inch of the threaded portion. These screws should not be used to attach wallboard to 3/8-inch backing board, as the backing board is not suitable to support a face layer using screws alone.