Deck Screws: Must for Setting up a Wooden Porch

If your house is located across a lake, pond or creek then it’s obvious to find a deck in your establishment. These sitting areas are not only popular in beach or lakeside houses, but also in houses located atop the hills. A deck/patio always enables you with an undisturbed panoramic view of your surroundings. This not only enhances the value of your house, but always enlivens your mood whenever you are around. Instead of going for concrete one, you can set-up such kind of patio in wood, which not only gives a great decor, but also makes us feel comfortable to use it. You will certainly require deck screws to construct this type of floor.

A wooden porch is made up of wooden platforms, which are fastened together by the above mentioned fasteners. Since such kind of patio is set-up outside of your house, so you will need hardware supplies, which will not only keep the slabs in place, but will also withstand the climatic conditions and if you’re setting up the porch for your beach house then do expect any kind of corrosion due to the all year round damp weather. And in such cases, the deck fasteners can only save your exclusive patio from any kind of corrosion. These are very special kind of rivets, designed especially for the wooden porch. Unlike regular lags, these metal pieces are specially designed to bear the harsh weather conditions, as these are coated with a specific solution that helps them prevent corrosion. These feature quite sharp edges and thus can easily go through any kind of wooden surface. Their points are cuspate and narrow, thereby reducing the necessity of using pilot drills to make holes, which may also harm the wooden planks. And if your surface is made up of any soft wood, say cedar then using a pilot drill is strictly prohibited. 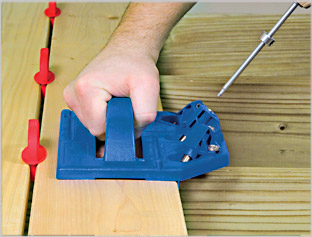 The deck screws are quite easy to be installed, but are equally difficult to pull out. This is because of their shank design. Their thread is adjusted by certain degrees. They usually require smaller degrees, which mean they have narrow threads, which subsequently suggests that they have more threads along the shaft. This feature makes them easy to get inserted into the surface.

So how would you choose the best deck screws?

An expert framer always prefers deck screws over deck nails, although the later one is bit cheaper than the former. Unlike nails, screws always tend to effectively attach wood where as in case of nails, wood may split apart, thereby causing cracks and eventually damaging the surface. 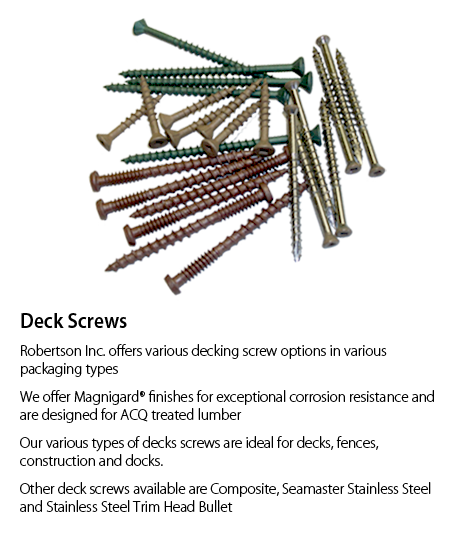 However, when it comes to selecting the deck screws, you should be careful enough in choosing the best deck screws. You should consider various factors such as the environmental conditions and if the deck is likely to be exposed to the saline weather. If your project involves any construction nearby waterfront then it is always suggested to go for galvanized deck screws, which can resist the humid climate.

You’ll find some special type of screws, which are protected with an extra waterproof coating, which extends the life of hardware further. Such kind of coating is usually made up of ceramic or epoxy. Such coating not only extends the life of the fasteners, but also prevents them from sliding out of place in the long run.

However, there’s a risk involved in using such screws. The problem lies in binding i.e. when you drill those screws into the deck; chances are the threads may bind up because of the extra coasting on the threads. Such loophole can create breakage, thereby making such application useless.

As we say, there’s a solution to every problem. You can still go with such fasteners and can solve this issue by creating pre-drilled or pilot holes for fastening. The pre-drilling indeed lessens the pressure applied on the screw, thereby preventing binding. 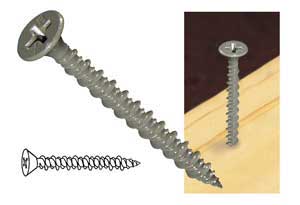 The length of the deck screws is another important factor to be considered, especially if you’re looking deck screws for the best ones for your project. For this, you need to first consider the type of material you are using. You should always pick the metal pieces, which should be long enough to attach two boards together firmly. You should measure the boards on which you’re going to do the fastening work. It will give you a clear idea in choosing the length of the rivets.

Always choose with flat heads, which can lie flush with the outer profile of the boards once the screw has been drilled. The flat head will prevent the screw from fitting above the surface the board, thereby stopping any potential damage/injury.

Now that you are done in choosing the length and type, it now becomes necessary to choose the correct screwdriver. The most commonly used driver is the Phillips head, which features a cross shape. This kind of driver will help you install deck screws more effectively and easily.