Screw Head Types and their Uses

At Mutual Screw and Supply, we field several calls from our esteemed clients, seeking help in choosing right bit of screw head types, appropriate for their requirements. Here’s a brief yet comprehensive guide to screw head types and drives. Read on!

When your jobs requires usage of screws then always remember to go for the right type of screw driver. While most of the screws look alike, but their screw heads are rather different, thereby enabling you to go for distinct screw drives, which fit with the heads of your chosen screws. For instance, Phillips and Pozidriv are hard to be distinguished from a distance of 10 feet. But both of these fasteners do feature different heads and simultaneously they require different kinds of screw drives for their installation. 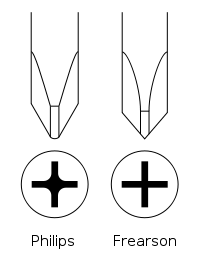 Here is a list of different types of screw heads.

Invented by Henry Phillips, this kind of drive was explicitly designed to cam-out (it’s a method in which the screw driver glides out of the screw head, when it is driven and the torque which is required to turn the fastener crosses a certain amount) when the screw was bogged down, so as to prevent any damage occurring to the head, nonetheless affecting the driver. This particular design however created relative difficulty in developing torque, thereby restricting into the old drivers.

Other hardware companies therefore discarded the Phillips concept, as it created a relatively tangled and sunken socket shape in the head of the rivets.

This is the most commonly used screw drive and is commonplace everywhere in the world, although its traditional usage is declining gradually, because of its slipping nature whenever heavy torque is applied over it.

Most of the screw drives available in the market are tamper-resistant because of their vagueness. The one-way and breakaway drives fall under this category, which require specialized tools to destroy the rivet while unscrewing them. The high-end quality of such drives is used on home electronics. Such feature even helps the professional technician to repair the equipment easily, without having to return the piece to the manufacturer.

Quadrex, which is also known as the Phillips/square screw drive, is actually a combination of Robertson and Phillips screw drives. While an ordinary Robertson or Phillips tool can be used for its application, there is still a specialized tool for it, which enhances the surface area between the rivet and the tool, thereby enabling to handle more torque.

Earlier, this drive was sold under the name Deck Mate, which is now considered as other kind of drive.

The Supadriv, which is also spelt as ‘Supadrive’ is almost similar to Pozidriv by design and people often get confused between these two.

Anyways, this particular drive can be identified by two of its unique features. It secondary blades are larger and are of equal thickness. Moreover, it has got a superior bit, thereby making the installation procedure more efficient, producing less cam-out.

The Pozidriv is the enhanced version of the Phillips screw drive. It is patented by American Screw Company and Phillips Screw Company. Many consider this name as an abbreviation of ‘positive drive’. The major advantage of such kind of drive is its likelihood to prevent cam-out, thereby enabling greater torque to be employed. As per ANSI, it is considered as type IA and is quite similar with Supadriv screw driver.

The Frearson, which is also known as the Reed and Prince Screw head type, is somewhat similar to Phillips, but the only difference is that it features a pointed 75° V shape.

It is superior to Phillips drive in one way, as its bit can fit all screw sizes. It is mostly found in marine hardware and needs a specialized screw driver under the same name. Its tool recess features sharp cross, thereby enabling higher torque to be applied, unlike the rounded Phillips head type.

The hexalobular socket screw driver, which is rather popular as Torx and star drive, is a star-shaped recess as the name suggests, featuring 6 rounded points.

It is specially designed to allow higher torque transfer from the driver to the bit, as compared to other drives. The Torx is mostly used in electronics and automotive industry, as it is highly resistant to cam-out and even reduces the need to go down with the drive tool.